Iron Meat is a classic run-and-gun game with plenty of challenge and old-school NES charm.
There are three levels of difficulty, just like in your favourite classics.
Tons of guns, enemies galore, and bosses that will make you go WTF?! Enjoy all of that and more across 8 levels chock-full of hard-boiled fun.
Controls are simple and intuitive, and the graphics are classic NES pixel art goodness.
Our game is still in early development, so expect many improvements. Some sprites and at least half the sounds are subject to change (not the music though).
Follow us on Twitter:  https://twitter.com/IvanMeat

Great work! I enjoyed a lot. I felt it was a bit unfair some parts but later realized that I was running carlessly :D The only thing I found lackluster was the sound of the weapons, especially the default one, something more "machine gunny" perhaps would be better, something like the Contra: Hard Corps one. Only my opinion. I am looking forward to playing the whole game!!

Glad you liked it! Weapon sounds are temporary and will be replaced in the future. Thanks for the feedback!

Played the forest level. All in all I did enjoy it the same way I enjoy Super C, but I do have a list of nitpicks:

-Feels a lot more chaotic than Super C. Probably because you have about 8 different elements at play all kinda thrown together.

-The stage is also very drawn out. I think had the stage been more thematically split up you could have also split up the enemies/hazards, making the stage feel more fresh throughout and also not feeling as cluttered.

-Some elements are hard to see. Like the guys who shoot blood among all the other blood that's on screen.

-The boss laser felt more like a trick. Up until that point I'd always been forced to be active and so never used the duck. Suddenly being forced to use it screwed me up.

-Weapons never stood out to me. They all seem incredibly similar, bar the one which shoots out in all directions which just feels out of place. This certainly seems more Super C inspired to me; it might be worth looking at Contra 3 Alien Wars for weapon inspiration. I always found that game does weapon strat best.

-The respawn time feels a little bit too long.

-Something about the game still feels flat, perhaps a lack of sound effects for movement? That's a stab in the dark though.

-Lastly, when I pressed shift in the config, it wouldn't recognize it.

All I can think of for now. If you're looking for anymore feedback hit me up.

Greetings! Thanks for the detailed feedback!
To be honest, I completely agree with all the points. Problems with the key in the unity engine itself, I do not know how to solve it yet
The level may seem drawn out because of the not quite successful level design. In the future I will correct it and the tightness will disappear

I timed it. First part took about 6:20 where as the first level of Super C only takes about 2:00. 6 Mins might not be long for a regular platformer but for something as fast paced as a contra game, 6 minutes is a long time.

Few other things I noticed:

-The marks for missiles that come down could be a lot clearer. I'm not sure if this is currently the case, but it didn't seem like they display on the top layer, perhaps that's just because they're blending in, but being on top might help.

-Lives should really reset between sections. RN I'm just killing myself to reset.

-Speaking of lives, it seems that getting score gives lives, but it might be more meaningful if there was an indicator of how much score you need between lives.

Sorry for the late reply.
I can not do levels for 2 minutes, because the game will be very short. Graphic content comes hard to me.
I'll correct  missiles marks, really not very noticeable.
I think that I will add the restart button.
And the score counter always seemed to me an interesting item, I don't want to remove it (or reset when a player gets a life)

Cool game, but It would be nice to have the ability to lock your aim while being able to aim freely that Contra: Shattered Soldier had

Hi! You already can do it: press left "ctrl" or "LB" on gamepad

No, I mean a but that locks the direction you are aiming in, but lets you move freely LB just locks you in place

Got it! I can't say for sure, but I'll think about how to implement it, thanks!

It seems to be a very promising product so far. Do you plan to add simultaneous players (2-4)?

This is Very Contra Inspired huh, I see level 1 inspirations everywhere in the video. I think the shock wave should kill the enemy solider to indicate you need to dodge it. I noticed at 2:46 the enemy doesn't die. This looks really great.

The game looks really good, how long does the demo last roughly? Also can I use a controller?

2 levels, each lasts about 5-7 min. And yes, you can use controller

I'm not sure i understand you right (my English is bad), but this is nice ^_^

it's a joke, on the movie " jerry Macguire "

he gives a long speach, and she says " you had me at hello "

Beautiful Pixelarts graphics.
The difficulty is somewhat balanced with the number of lives
At the second level, falling is very frustrating.
Now I remember why I did not like Nintendo's "Contra".
God job!
:)

I loved the game, beautiful graphics and very soft gameplay.

I finished the game a few times and was able to make a more interesting gameplay.

You are playing very nicely, cool!

Loved Contra back in the day. Maybe for a similar game near 3 decades later, something fresh could be introduced... Just an idea :)

Thanks for the feedback! Right now, I'm working on a basic mechanics, but later, of course, i will add some new features.

Nice Man! Good Job!  It takes me to the my youth arcade time! Good Job! Can I know what Game Engine did you used?

Oh yeah, and I know that there are like 20 lives, but some live drop here and there it would be nice! I'm guessing the final versione will have that! Again! Awesome Work!

Yes,  there will be live drop! It's only pre-pre-pre-alfa :D

Reply
PEK PLAYS352 days ago(+1)
Awesome game i loved every second of it, great job, feel free to email me and keep me up to date on the progress, im really into this haha
Reply
Razz352 days ago

Hi. Thank you, I'm glad that you liked the game. Of course i will give an announcment, when the new build is ready.

The game reminds me a lot of contra with the controls and game play, it's a cool game that I would like to see more done with!

this game back amiga :D

Great start! I've never been a fan of the one hit death, and I do think some attacks need a little bit better telegraphs, but overall the movement is fantastic, the art and music are awesome and it was a blast to play! Awesome work so far!

Pretty good pre-alpha. I wish there were some life drops but other than that, fun times with lots of guns. :)

Thank you for the feedback! Fast fix - the hero has 20 lives now. Major bugs will be fixed later.

Not a lot if you play like me and you end with 6 lives in the end on Normal difficulty :D Anyways, great game! Liked the music and sound effects. 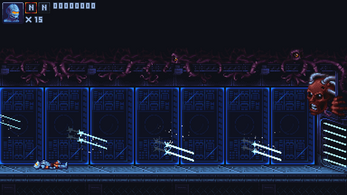 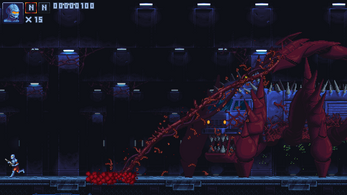 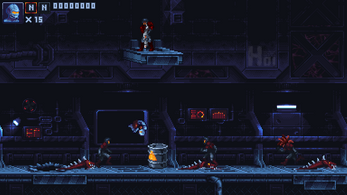 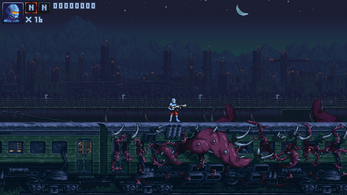 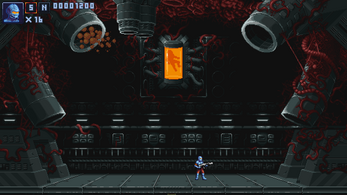